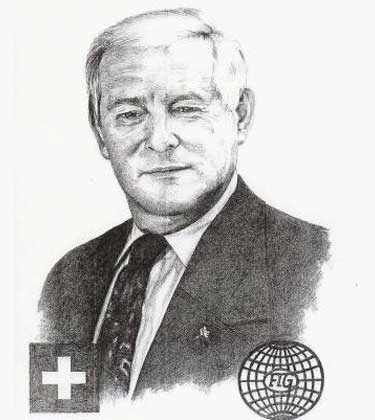 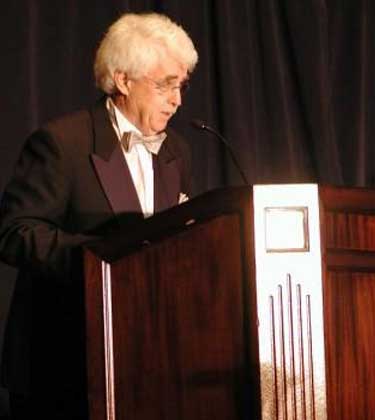 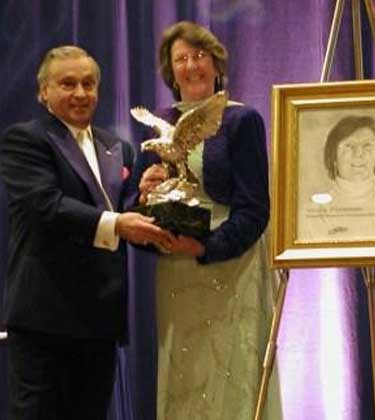 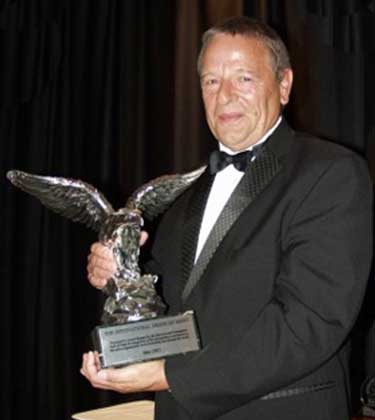 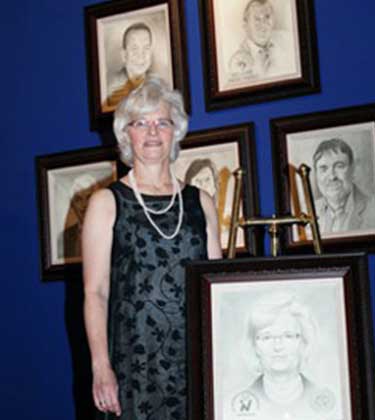 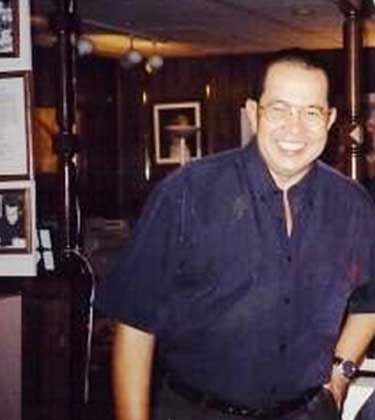 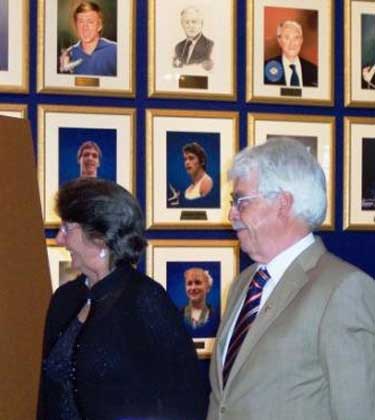 The International Gymnastics Hall of Fame presents THE INTERNATIONAL ORDER OF MERIT award to an individual who has been determined by his or her peers to have made a most significant contribution to the development, the maintaining of harmony, the advancement of participation and appreciation for the sport of gymnastics in their homeland, their region and the world of sport. Such contribution must be obvious within their homeland and region and must be known to those involved in gymnastics in their region. To nominate an individual for this award, any national or regional gymnastics federation / association may submit such nomination with the associated materials to include achievements, background, positions held and names of individuals from their region of the world that share this desire to recognize and honor this nominee. 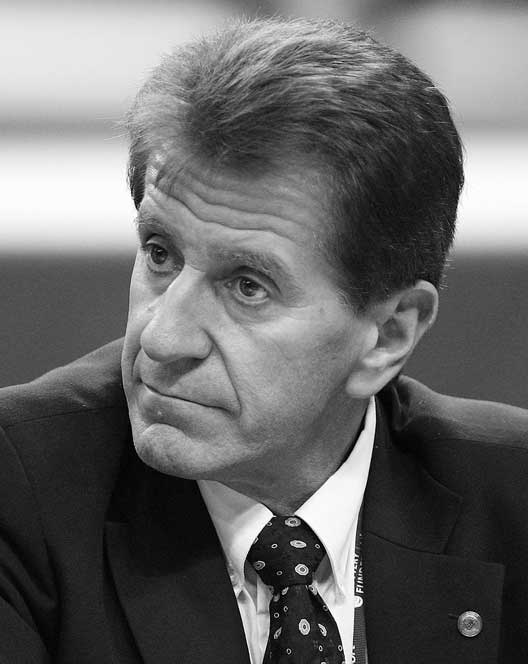 As Hardy Fink took the stage to accept the 2019 International Order of Merit, he said, “I am so delighted to be in this beautiful city and state of Oklahoma for the first time in my life. I thank the board of directors for giving me this super honor. It’s very much appreciated, more than I can say.”

In a variety of roles as an athlete, coach, administrator, judge, and educator, Hardy Fink has demonstrated a life-long commitment to the quality, development and growth of gymnastics around the world.

Born in Canada on May 8, 1947, Hardy actually began gymnastics on his 16th BDay at the Hamilton Germania Gymnastics Club.

After finishing in 8th place in the 1969 Canadian nationals, he earned the right to represent Canada in international competition.

Even while he was competing, Hardy began demonstrating his leadership skills as he also became the head coach, the vice-president, and publicity chairman of his gymnastics club.

In the mid-1970’s Hardy and his wife, Cynthia, established the Port Alberni Gymnastics Academy (PAGA) using a business model that has served as the prototype, both as facility and as business, for similar gyms that exist everywhere today.

Beginning in 1988, Hardy served as the Canadian men’s national team coach and high-performance director for 10 years, which resulted in a period of unprecedented success for Canadian gymnastics.

At the young age of 21, Hardy became the youngest judge ever to earn an international judging brevet for men’s gymnastics. Over the last five decades, Hardy  has judged at 35 Major International competitions, including eight Olympic Games, and 20 World Championships.

After judging controversies at the 2004 Athens Olympics, the reliability of the existing judging system was brought into question.  Hardy, who had long advocated for a more objective and effective tool for judging the sport, helped institute an open-ended code of points.

In 2005, Hardy began focusing his talents toward building and teaching a worldwide coach’s curriculum.
As the Director of Education and Academy Programs for the FIG, Hardy’s courses have been presented in over 484 seminars, to 8000 different coaches from 139 countries.  His Age Group Development and Competition Programs serve as a “recipe” for the many dozens of gymnastics federations that do not have the resources or expertise to develop their own.

A lifetime advocate for fitness, as well as avid outdoorsman, Hardy enjoys the many benefits of living on Vancouver Island in British Columbia.  He has also maintained superb gymnastics fitness which helped him compete successfully in the 2018 German Gymnastics Festival in Berlin at the young age of 70!

Hardy and Cynthia are proud to dedicate much of their time these days to their family, which includes their two daughters and 5 grandchildren.

When Slava Corn was just a child, her family fled the Communist regime of Czechoslovakia, and arrived in Canada in 1951. Her father contracted the family to work on a sugar beet farm in Alberta to pay for the trip from Hamburg to Halifax.

Corn grew up in Etobicoke, a suburb of Toronto. Her family got involved in the Czech activities as well as the Sokol gymnastics program. Corn was her mother’s partner in mass demonstrations of gymnastics and calisthenics know as Sokol slets in various cities in the U.S. and Canada.

The Sokol ideal of a sound mind in a sound body has provided Corn with the proper foundation which has led to her impressive leadership successes.

Corn was always interested in gymnastics, but more as a coach.  From 1960 to 1974, she was the gymnastics coach and club director for the Sokol. From 1978 to 1985, she served as an international gymnastics judge. Throughout the 1990s, she served in various roles in the Canadian gymnastics federation, and as chairman of the board.

Born July 16, 1943, in Czechoslovakia, Corn has been a member of the International Gymnastics Federation Executive Committee since 1992. She has also chaired the FIG Media and Communication Commission. She was also instrumental in developing and implementing the highly successful FIG Academy program—an international coaching education system that helps experienced coaches spread their knowledge in countries who are trying to bolster their gymnastics programs.

She has also been director of programming at Seneca College of Applied Arts and Technology in Toronto, and is regarded as one of the pioneers of women in sport in Canada.

In 2014, the International Olympic Committee President Thomas Bach named Corn to the IOC’s Women in Sports Commission. Just after taking up his duties in 2017, FIG President Morinari Watanabe decided to mandate a working group to review the federation’s existing rules concerning emotional and sexual abuse and to reinforce them. That working group includes Slava Corn.

Slava Corn retired from the FIG after the 2016 Rio Olympics. She is still an honorary vice president for the FIG and will serve as an advisor to the newly elected FIG Executive Committee.

Corn has experienced and worked in some capacity at eight Olympic Games and more than 50 World Championships.  She has been acknowledged at the Canadian Sports Awards as one of Canada’s most influential women. And on May 19, 2018, she was recognized as the 2018 International Order of Merit Honoree from the International Gymnastics Hall of Fame.

Though he preferred a more behind the scenes role with the International Gymnastics Federation, Philippe Silacci was the driving force of efficiency and excellence in media operations at major international gymnastics events for 22 years. Silica’s leadership as the FIG’s Chief Media Operations Officer was especially instrumental during a period of unprecedented growth of media interest in the sport.

Born November 29, 1949 in Switzerland, Silacci went straight to work after finishing his education. From 1970 to 1988, he worked in the public relations department for the Longines watch company’s sports timing division. The position introduced him to the Olympic Games, which he attended from 1972 to 1984 as a Longines representative. In 1988, he joined the communications department of Swiss Timing Limited, which involved press activities at the Seoul Olympics that year, as well as the ’92 Winter Games in Albertville, France. Later in 1992, after an invitation from Secretary General Norbert Bueche, Silacci transitioned to the FIG, and has represented the federation at every Olympics since. 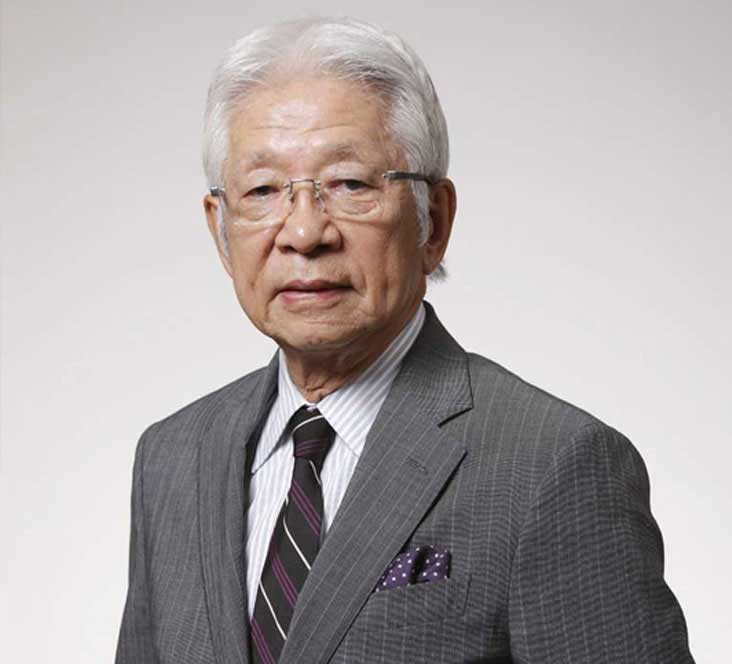 Mr. Hidenori Futagi has served as President of the prestigious Japan Gymnastics Association since 2001. A brilliant leader, and one of the most widely recognized figures on the economic landscape of Japan, Mr. Futagi is a passionate advocate for promoting the inherent artistry of the sport of gymnastics. Under his leadership, Japanese gymnastics has flourished in every discipline on the International Gymnastics Federation (FIG) program: Artistic, Rhythmic, Trampoline, Aerobic and Gymnastics for All.

Mr. Futagi is the former president of Aeon Corporation, the largest retailing company in Japan, and the 17th largest in the world. Through a large, personal, philanthropic gift, Mr. Futagi became a co-founder of the Aeon Environmental Foundation. As the director of the foundation, he has helped build more than 326 schools throughout the world, in countries such as Cambodia, Nepal and Laos, and has provided educational opportunities for over 200,000 students. Together with its customers, Aeon Foundation raised and donated more than $50 million (US) to the relief and rebuilding efforts after the devastating earthquakes and tsunami in eastern Japan in 2011.

With an extensive background in sports medicine, Dr. Michel Leglise continues to make vast and significant contributions through his various roles in gymnastics. Serving the International Gymnastics Federation since 1982, Dr. Leglise is currently president of the FIG's medical and anti-doping commissions, and is a member of the FIG scientific commission.  He is also First Vice President of the FIG, and a member of its executive committee.

Holding degrees in biology, sports medicine, occupational medicine and ergonomics, Dr. Leglise has written numerous articles on growth, biology and the athlete's spine. For the International Olympic Committee, he is coordinator for the medical commission's sport, child and adolescents working group, as well as serving on the cultural commission for the Youth Olympic Games.

From 1984-2001, Ms. Langsley was the official photographer for the International Gymnastics Federation, which published two coffee tablebooks (1996, 2000) of her beautiful work. A native of Sheffield, England, Langsley was the sport's most influential photographer whose imagesfilled the pages of numerous gymnastics publications worldwide. Her photos also were featured on 93 covers of International Gymnast magazine.

Ms. Ahlquist is recognized for her generous and inspired leadership in bringing gymnastics to a wider audience the world over. She is a member of the International Olympic Committee's Sports for All Commission, as well as the Federation Internationale de Gymnastique (FIG). She serves at President of the Gymnastics for All Committee.

Perhaps no one has been more influential in our sport's development. He is recognized for his dedication and research in standization and safety testing with regard to gymnastic equipment that has advanced performances over the past 25 years. He was a former gymnast who studied sport sciences for eight years at the University of Freiburg. In 1983, he joined the FIG and began the task of establishing standards for gymnastics equipment. He is now on the faculty at the University of Freiburg, Germany.

Ms. Florenzano was recognized for her contributions to the growth of gymnastics in her home country of Brazil, and throughout her region of the world. During her years of service to the sport, she has held many prestigious positions, including:

Ulrich “Uli” Spieth has been a revered and respected figure on the international gymnastics scene for more than 30 years.  As managing director of the Spieth equipment company, and a long-time advisor to the FIG and countless national gymnastics federations, Uli has contributed both technical and visionary guidance to the sport of gymnastics, through equipment innovations, safety improvements, technical standards and manufacturing excellence.

Daniel Baumat, as president of Swiss Timing, has contributed innumerable technical advancements to the process of collecting, tabulating and displaying the scores for Olympic, World and European gymnastics competitions. Indeed, Mr. Baumat’s staff and Swiss Timing equipment have played a pivotal role in some of our sport’s most historic moments – such as in Montreal, during the 1976 Olympics, when Swiss Timing displays flashed the first perfect 10.0 scores in Olympic history, earned by Hall of Fame legend Nadia Comaneci.

Dr. “Zak” Ahmad has played an extraordinary role in growing the sport of gymnastics, at all levels, throughout Asia and the Pacific Rim. His countless contributions throughout his career have included his tenure as:

Perhaps the noblest statesman the International Gymnastics Federation has ever known, Norbert Bueche served as the Secretary General of the FIG for many decades. As the inaugural recipient of the IGHOF’s International Order of Merit, Mr. Bueche and his tireless and distinguished service to the growth and integrity of the sport of gymnastics epitomizes the spirit and meaning of this prestigious award.