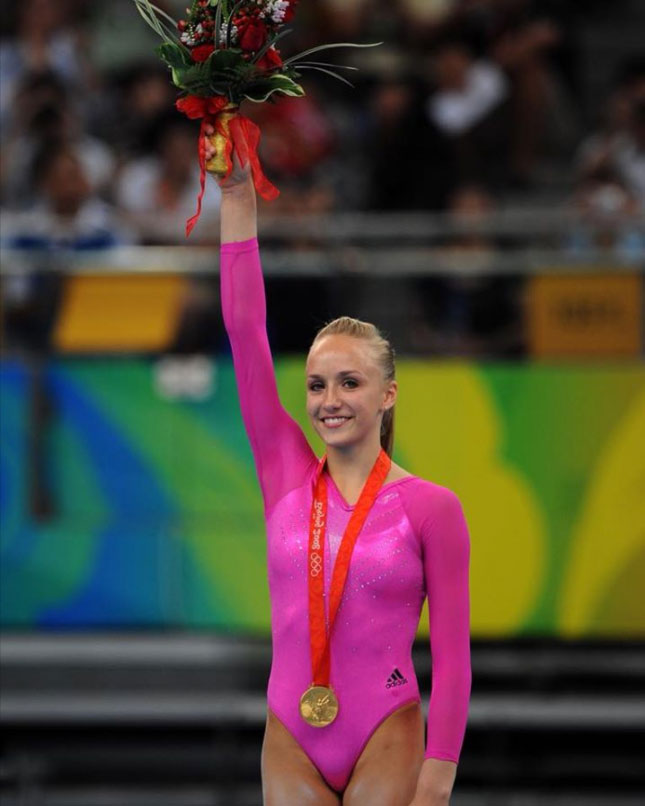 The International Gymnastics Hall of Fame, on May 19, 2018, in Oklahoma City, inducted Paul Hamm and fellow American Nastia Liukin, along with Romanian Andreea Raducan. Alexei Nemov entered the Hall of Fame in 2017, but could not travel at the last minute. He attended in 2018, however.

Unfortunately for Hamm, he had to travel to Switzerland and let the Court of Arbitration for Sport decide if the gold was rightfully his. South Korean Yang Tae Young had been erroneously docked a tenth of a point on parallel bars by the judges. Hamm was awarded the gold but was robbed of celebrating his accomplishment. Feeling a lack of support from his own federation, he retired at 21 at the height of his career.

He attempted to make a comeback for the 2008 Olympics, but a broken hand derailed that dream. Hamm was a well balanced all-around gymnast and always gracious in interviews.

After battling various injuries, Nastia Liukin peaked at the right time. During the 2008 Olympic all-around final she had the meet of her life. She edged teammate (and Beijing roommate) Shawn Johnson for the gold. Johnson had just won the 2018 U.S. Championships and the Olympic Trials. Liukin finished second at both meets.
In Beijing, Liukin also tied for first on uneven bars with He Kevin, but was dropped to second-place via tie-break. She also earned the silver on beam and bronze on floor.
Andreea Raducan will always be remembered for being stripped of the all-around gold she won at the 2000 Sydney Olympics. There is no escaping it. She had been given cold pills from the team doctor. A drug test showed that the pills tested positive for a banned stimulant. Raducan was able to keep the gold that she and her Romanian teammates won, however.

Raducan did not turn her back on the sport despite numerous attempts to reclaim her Olympic all-around gold. She competed at the 2001 Ghent World Championships, where her team won the gold. Raducan placed third all-around and won golds on beam and floor and the bronze on vault.

At 33 years of age, she was elected president of the Romanian Gymnastics Federation in 2017. After Romania did not qualify a full team to the 2016 Olympics, she promised “profound change” to make sure that never happens again.

Alexei Nemov had quite a career. At the 1996 Olympics he led Russia to its first team title. He won a total of six medals at those Olympics: team and vault golds; silver all-around; bronzes on floor, pommels and high bar. He repeated that six-medal feat at the 2000 Olympics while rearranging his medals a bit: all-around and high bar golds; silver on floor; bronzes for team, pommels and parallel bars.

For an encore, his high bar routine at the 2004 Olympic event finals literally led to the open-ended Code of Points, which was implemented two years later. His thrilling, six-release routine had fans in a frenzy, but his 9.725 angered the crowd so much that they wouldn’t stop booing. Finally, Adrian Stoica, the FIG Men’s Technical Committee Director, walked over to the judges and convinced them to raise Nemov’s score, which they did. A 9.762 did nothing to placate the audience, which booed and jeered again. Meanwhile, Nemov acknowledged the crowd for their support but realized Paul Hamm was next to compete.

”I saw that Paul and his coach were unclear of the situation,” Nemov said. “The judges’ panel slightly lost control…. So I automatically attempted to go onto the podium again to ask the people to quiet down. It was an act of sport ethics. I am sure that my colleagues would do the same in similar circumstances.”

It was a magnanimous gesture nonetheless.