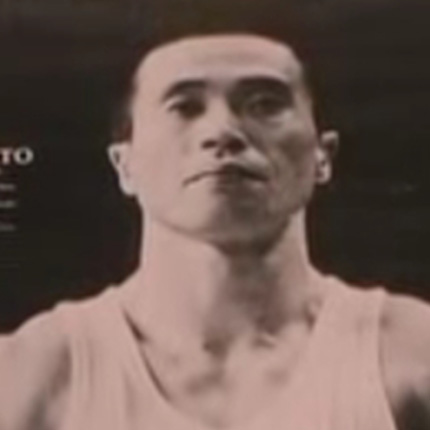 In Munich, Kato became only the third gymnast in history to retain the Olympic men’s all-around title. With Kato taking gold, Kenmutso silver, and Nakayama bronze, Japan achieved the first clean sweep in the men’s Olympic all-around competition since 1900.

Admired not only for his originality, and his level of refinement, form and execution, but in addition to his technical perfection, Mr. Kato had style.

One of five children, Sawao Kato was born on the 11th of October, 1946, in the Niigata Prefecture in Japan. As a young child, Kato liked many sports, but his early gym experience in high school made him choose gymnastics.

His technique and style continued to define men’s gymnastics for three Olympiads. Admired not only for his originality, and his level of refinement, form and execution, but in addition to his technical perfection, Mr. Kato had style.

At the 1968 Olympic Games, as the newly elected team captain, Kato won the all-around title and led Japan to their third successive victory in the event, with Japanese gymnasts filling four of the top five individual places.

By 1976, at the Olympic Games in Montreal, the Soviet machine was starting to rumble again. Kato lost his all-around crown to Nikolai Andrianov, but retained his individual title on the parallel bars.

His total medal count over three Olympic Games remains solidly in the record books, with 12 Olympic medals, eight of them gold.

Today, Mr. Kato works as a professor at Tsukuba University, one of Japan’s most respected educational institutions. He’s active as Vice President of the Men’s Technical Committee of the FIG.