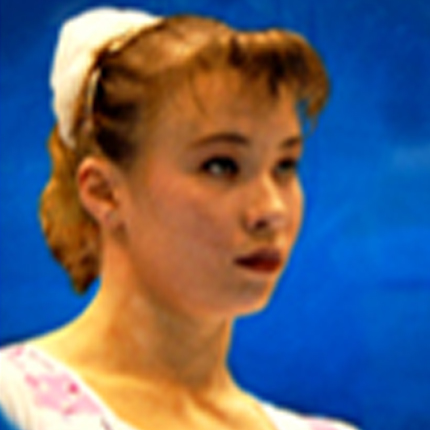 She retired after leading her team to the Olympic gold medal in 1992, but made a comeback in 1995.

The elegant Svetlana Boguinskaia, born February 9, 1973, in the city of Minsk, Belarus, found success at an early age, winning the all-around title at the 1986 Junior European Championships. She was a three-time Olympian, representing the Soviet Union in Seoul 1988, the Unified Team in Barcelona in 1992, and Belarus in Atlanta 1996. In Seoul, she won the gold medal with the team, the all-around bronze medal, the gold medal on vault, and the silver on floor. She won the 1989 European title, the 1989 World All-around title, and swept all five golds at the 1990 European Championships. She retired after leading her team to the Olympic gold medal in 1992, but made a comeback in 1995. Remarkably, she won the all-around silver medal at the 1996 European Championships a decade after her junior victory. At the 1996 Olympic Games, she qualified for her third consecutive Olympic vault final. Boginskaya, who now resides in Houston with her husband and two small children, inspires young gymnasts today as a choreographer and coach.