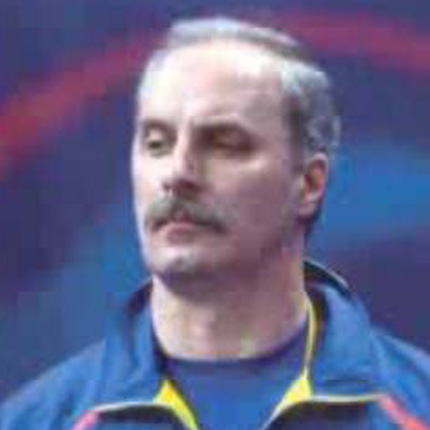 Part of the Magnificent Seven that won the Olympic gold in Atlanta, Dawes became the first African-American to win an individual Olympic gymnastics medal – bronze on floor exercise.

Romania endured much change after the fall of socialism near the end of 1989. Octavian Bellu took over as head women's coach, succeeding Adrian Goreac, and managed quite well, considering the new and uncertain circumstances throughout the entire Eastern bloc.

Romanian gymnasts no longer wore the traditional national emblem on their leotards, but instead sported a distinctive letter "V" — for victory — in their national colors. Certainly, Bellu's coaching tenure will be remembered for its remarkable number of triumphs.

Born Feb. 17, 1951, in Ploiesti, Bellu was a gymnast — admittedly an average one — prior to entering the coaching profession. He graduated from the Faculty of Physical Education and Sports Institute in Bucharest, and worked for a while as a teacher at Valea Calugareasca.

While serving as national coach in Deva, from 1990-2005, Bellu's talented teams strung together five consecutive world titles, from 1994-2001, and two Olympic team golds, in 2000 and 2004. Bellu's gymnasts were absolutely dominant in his final Olympics, in Athens, winning four of the six available gold medals. During his time at the helm, his teams combined to win 82 World (59) and Olympic (23) medals.

After retiring from his position at Deva, Bellu and long-time assistant Mariana Bitang became advisers on the staff of Romanian President Traian Basescu.