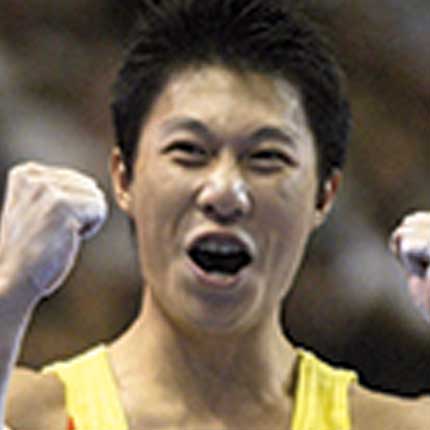 Dominant on parallel bars and vault for an entire decade, winning sixteen major international titles, Li Xiaopeng is the most successful Chinese gymnast of all time.

At age 16, Li Xiaopeng became China’s youngest world gymnastics champion ever, when he and his teammates won the men’s team final at the 1997 Lausanne World Championships.

Li Xiaopeng was born July 27, 1981, in Changsha, Hunan. He was inspired to take up gymnastics by his idol Li Ning, who won three gold medals at the 1984 Olympics in Los Angeles.

Li began training at the famed Changsha Spare-time Sports School in Hunan Province at the age of six.  His diligence and skill soon set him apart from his peers, and at fifteen, he was selected for the Chinese national team.

Li became China’s youngest world gymnastics champion, at sixteen years of age, when he and his teammates won the team gold medal at the 1997 Lausanne World Championships.

At the same competition, Li also received a silver medal on parallel bars, and a bronze on floor exercise.

At the 2003 Anaheim World Championships, Li Xiaopeng was the only person to win three gold medals on vault, parallel bars, and in the team competition.

He was selected as the 2003 World Gymnast of the Year.

Hampered by a severe foot injury, Li and the Chinese team, were disappointed with their performances at the 2004 Olympics in Athens.

Even after struggling with foot, ankle and elbow injuries, Li made a determined comeback just in time for the 2008 Beijing Games.

He excelled once more on his two preferred events, parallel bars and vault, to contribute to China’s victory in the team competition. Li won the individual gold on parallel bars as well.  He retired from gymnastics in 2009, but with two complex skills named after him, Li’s gymnastics legacy lives on.

One year later, he married Angel Li, the daughter of Chinese gymnastics legends Li Xiaoping and Wen Jia who now live and coach in Southern California.

Their fun and charming California wedding ceremony, set to the music of Michael Buble, went viral all around the world which added to their fame and popularity.

With his Olympic success, and his outgoing personality, Li and his family have become extremely popular celebrities in China.

In January of 2012, their daughter Olivia was born.  Young Olivia has appeared with her famous parents on several reality television shows in China, and Xiaopeng claims that Olivia even has more fans that he does.

In 2016, the couple welcomed their second child into the world, a son named Oreo.

Li Xiaopeng uses his celebrity for the benefit of others, and in 2014, he joined other Hall of Fame gymnasts Nadia Comaneci and Alexei Nemov as members of the Laureus Academy.

Laureus is an international non-profit organization made up of world-renowned sports stars who have joined together with a mission to use sports as a tool for social change.

With sixteen major international titles, two more than his hero Li Ning, Li Xiaopeng is the most successful Chinese gymnast of all time, and in 2019 he  enters the International Gymnastics Hall of Fame. 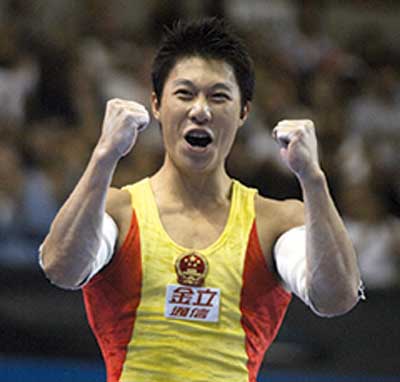